– Message transmission in the absence of conventional communication from a ship to offshore or onshore facilities at a minimum distance of 2 kilometers (depending on the number of radiating components).

– Action coordination when moving in narrow passage, in a fog, and during mooring.

– Loudspeaking communication during search and rescue in the sea under conditions of high noise level caused by wind and waves.

– Creation of a protective perimeter around the ship by way of sending a special signal (efficient impact onto groups of people on floating crafts around the ship). 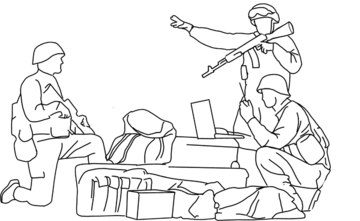 Today means of influence onto an enemy become more sophisticated. Conflicting parties feel free to use a negative potential of “orange” layers of population (in case of the so-called “orange revolutions”). Unique tactical and technical characteristics of long-range loudspeaking equipment make it possible for the conflict participants to conduct “information war”. 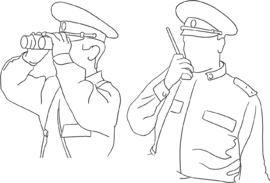 The earlier violators of sea or land borders receive information about necessary authorised requirements of services guarding the borders, the more time they will have to make a right solution. A possibility of direct audible warning in the absence of other communication means can help to prevent conflict situations. Regardless of the type of guarded borders – sea or land ones, availability of equipment which makes it possible to perform the above said tasks will help to find a way of resolving a conflict.
Long-range loudspeaking equipment is intended for installation onto helicopters, ships, and land-based vehicles. It can be helpful to coast guard, border forces, and for other military (defense) objectives.

In conditions of present-day battle, loss of control over forces is the worst scenario for any commander or military commander. Long-range loudspeaking equipment is used on close combat control vehicles under conditions of electronic warfare activity (EWA) conducted by an enemy.